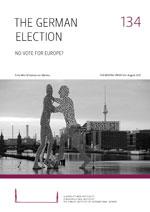 The outcome of the German federal elections on September 22nd will have a significant impact on the management of the on-going eurozone crisis and set the tone for the future course of European integration.

Although the EU and the euro are largely absent from current electoral debates, significant differences on these issues exist both inside and between German political parties in the run-up to the September polls.

However, in the absence of significant debate, fundamental decisions over the future of EU integration will be postponed until after the election, when a cross-party compromise appears more feasible.

Regardless of the election outcome, the next German government is likely to prove more conciliatory on austerity policies in Europe and will boost domestic spending, but will retain some red lines on further EU integration.

While the rhetoric and the pace of change might differ significantly depending on the shape that the next coalition government takes, German eurozone policies will continue to trade fiscal solidarity for structural reforms.