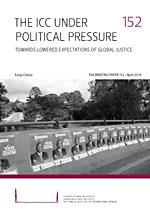 In 2010, the International Criminal Court (ICC) launched investigations into the 2007–2008 post-election violence in Kenya, in which some 1,200 people were killed and several hundred thousand displaced. The ICC is breaking new ground with the Kenyan cases; for the first time sitting heads of state are facing charges before the Court.

Kenya’s response to the proceedings has involved a number of political and judicial measures. It has obstructed the work of the Court; it has sought deferral of the cases by the Security Council; and it has threatened the ICC with mass withdrawals.

Kenya’s objection to the trials has gained regional support and renewed strength for the claim that the Court has an anti-African bias. Its claims that the Court should not prosecute state leaders because of concerns over regional peace and security have been met with understanding. The Security Council has, however, refused to suspend the trials.

The political attack against the ICC will have broader implications for the Court. The Court will need to reconsider how it protects witnesses, safeguards evidence, and selects cases for prosecution. It may even have to retreat from the principle of prosecuting sitting heads of state.

The expectations placed upon the ICC as an institution of global justice have been unrealistic. The current international political climate will not further this goal. Major powers remain outside the Court and the current Ukrainian crisis will make it hard to agree upon Security Council referrals.