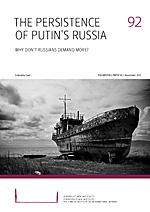 Many in Russia have expressed their disappointment with Putin’s decision to run for a third presidential term. They claim that Putin is becoming the new Brezhnev and that the stability he was once praised for bringing about in Russia is now turning to stagnation.

Cynicism and disillusionment with the Putin regime seem to be becoming more widespread in Russia. Ever-increasing corruption, lack of the rule of law and political competition as well as lack of innovation and dynamism in the economy all reinforce the general feeling of pessimism.

One would expect that the weakening legitimacy of the regime would lead to vocal demands for change. However, this is not the case in Russia, where several historical, political, structural and sociological conditions make wider popular protests unlikely.

The tragedy of today’s Russia seems to be that the regime is too weak to reform itself, yet simultaneously strong enough to prevent viable alternatives to its rule from gaining ground. Despite the likelihood of a negative future trajectory, Putin’s Russia seems set to drag on.