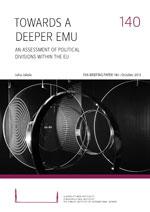 The extraordinary political decisions taken to tackle the financial and economic crisis, and to reform and reinforce the EMU have opened up some old wounds and created new political dividing lines in the EU.

The EU has witnessed the re-emergence of the north-south divide as a key marker of distinct political and economic visions and imperatives within the EU. At the same time, the division between the east and west is diminishing.

Despite the British reluctance to join the current political processes propelling a deeper economic integration, no other profound preconditions for the EU’s future development have been established by the member states. Yet the depth of the reinforced EMU is currently under consideration in many member states.

The strengthening of the populist and Eurosceptic political movements has led to the resurrection of the anti-EU and pro-EU political dividing line in many member states. This is increasingly reflected at the EU level, and might constrain the EU’s future development.