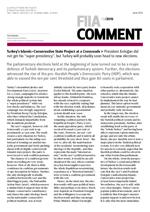 The parliamentary elections held at the beginning of June turned out to be a major defence of Turkish democracy and its parliamentary system. Further, the elections witnessed the rise of the pro-Kurdish People’s Democratic Party (HDP), which was able to exceed the ten per cent threshold and thus gain 80 seats in parliament.