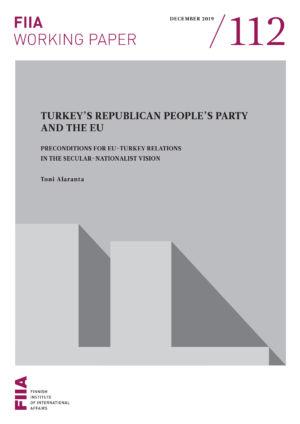 After 17 years of the Islamic-conservative AKP’s electoral hegemony, the secular-nationalist Republican People’s Party (CHP) achieved significant success in the recent municipal elections on March 2019, and is now increasingly challenging President Recep Tayyip Erdoğan. The secular-nationalist political discourse has traditionally advanced the idea of making Turkey a modern nation-state closely attached to the West, yet the West is also seen as a potential threat. The CHP identifies itself as a social-democratic party, and is now trying to build a wide pro-democratic platform based on a social market economy and fundamental rights.

The party’s strong secularist and Turkish nationalist core has made it difficult for the CHP to gain support among the Kurds and religious conservatives, and this remains challenging. Strong nationalism and suspicion about the West are deeply ingrained in Turkey’s political culture. On the other hand, in order to be inherently coherent, the secular-nationalist vision requires an ideological attachment to the Western world. Stemming from these premises, under the CHP’s government, Turkey’s foreign policy would likely prioritize good relations with the West, and re-invigorate the country’s EU prospect.

Turkey’s invasion of Syria was predictable: A violent prelude to making a major deal to end the Syrian war