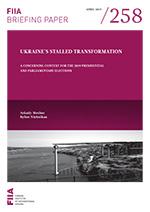 Despite the momentum for fundamental change that emerged in Ukraine after the Euromaidan revolution of 2014, the incumbent elites were able to safeguard many traditional mechanisms for extending their stay in power and effectively impeded the systemic transformation.

After the presidential and parliamentary elections of 2019, Ukraine will face an increased risk of populism and radicalization of the political agenda on the one hand, and apathy and disengagement among the population on the other.

In these circumstances, the West should be ready to increase its involvement in Ukraine, but also to step up conditionality in order to influence the behaviour of protectors of the old system, interacting more with the pro-reform constituency in Ukraine.

Russian-Ukrainian relations: The farewell that wasn’t