Elisabeth Guigou began her speech by explaining her views on the decades leading up to the coming into force of the Lisbon treaty. She described three distinct periods, the first ranging from the mid-80s to 1995, the second until 2000, followed by a time of institutional crisis reaching up to the present day. The first decade, in her view, was one of innovation and fervent activity, solving many previous problems. Guigou emphasized the importance of the Kohl, Mitterrand and Thatcher –trio, as well as Jacques Delors’ role. The way that the Iberian enlargement and the end of the Cold War were handled was, to her mind, successful, as was the groundbreaking Schengen agreement.

Guigou considered the year 1995 a turning point because of the introduction of new policy areas, the “adventure” with the pillar structure, as well as more coherent policies towards the EU’s neighbours. Visibility was heightened and the ambitious goal of a monetary union brought to the fore. She pointed out the US scepticism at the time towards both the idea of the Economic Monetary Union (EMU) and European unity in general. Nevertheless even Europe’s Mediterranean countries, disparagingly labelled the “Club Med”, were able to eventually take part in the Euro. Yet, said Guigou, Delors’ thought of a monetary union without a common fiscal policy being hobbled holds true to this day. Delors’ plans for competitiveness and employment were insufficiently followed, despite collaboration in other fields, such as judicial cooperation and family rights, embodied by EUPOL and EUROJUST.

The institutional crisis, beginning from roughly 2000, was ascribed by Guigou to a number of factors. She said that the Commission was weak at the beginning of the millennium, pursuing excessively liberal policies – also, when the Commission didn’t make proposals, this was left to the member states and thus the EU itself was weakened. The Lisbon strategy was insufficiently adhered to and the Stability and Growth pact was disrespected by not only the southern member states Greece and Italy, but France and Germany as well. As regards to the Constitutional treaty, Guigou pointed out that it was badly named and presented and therefore met fierce resistance in France and in the Netherlands.

Describing the EU as it stands, Guigou said that it is more heterogeneous than previously, with the Franco-German weight lessened due to the accession of new states. Europe showed itself to be somewhat weak as regards the Greece crisis for example, but this was, according to Guigou, in part due to the fact that Juncker’s EUROSTAT had not been fulfilled in the intended manner, due to France and Germany being unwilling to relinquish data. The same applied to European issues on a wider scale – whereas the European Parliament (EP) is European in its thinking and outlook, the national parliaments seem less enthusiastic about European issues, typified by scepticism towards enlargement. On the positive side, the EU dealt decisively and swiftly with the financial crisis.

Speaking of the innovations of the Lisbon treaty, Guigou considered the increase of qualified majority voting in Council to be a positive step for democracy and said that the European External Action Service (EEAS) offers an excellent tool to channel the economic might of the EU also for the benefit of political objectives. Although the EU is the greatest donor of development aid and has a greater GNP than the US, it remains to date far inferior in terms of using this strength in its foreign policy.

Guigou also considered the new positions of High Representative and European Council President to be positive innovations for continuity, but said that although the new arrangement looks good on paper the actual implementation of the treaty will be difficult. This will require the institutions to want the EU to function in its new form. The EP, she said, should act as a political guardian rather than interfere with the Union’s functioning. The Commission, for its part, should return to its previous role as engine of the European project and coordinator of legislation. Here, enlargement and Catherine Ashton’s work of coordinating the foreign policy commissioners will be challenging. Guigou also emphasized that the member states should continue to act through the community procedure of decision making, rather than bypass this.

Guigou complained that although Ms Ashton’s proposals for the EEAS are laudable, she has thus far not done much for relations with the EU’s neighbours and partners and has been too slow to name the Heads of delegations. In Brussels, Guigou surmised, there is insufficient will to give her extensive powers, forcing the Commission to take on budgetary coordination duties for development aid and neighbourhood policy, for example. She praised José Manuel Barroso and Herman Van Rompuy for their actions thus far under the Lisbon treaty.

Guigou hoped that the EU would speak, not only with one voice, but from one mouth at the G8 and the G20. Also, she emphasized the importance of Russia and the Middle East for the EU and said that it was important for the Union to be active in Africa and the Mediterranean area and take China’s heightened role into account. She concluded that the EU can be a significant influence in global politics, if only it can find common will. 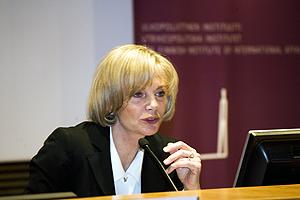 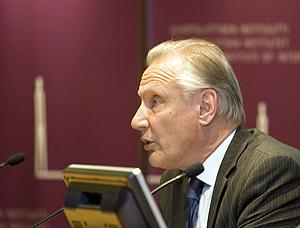 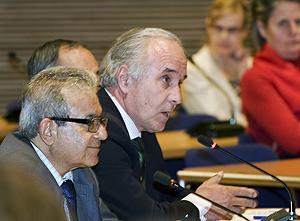 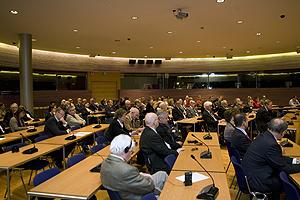