Here are some latest FIIA publications on the changed security environment in Europe:

Zelenskyy’s change of approach towards Russia: From soft touch to firm hand by Arkady Moshes and Ryhor Nizhnikau

European politics in times of crisis: Developments in Germany, France and Italy, and consequences for the EU by Marco Siddi, Niklas Helwig and Tuomas Iso-Markku

From words to action? European Strategic Autonomy after the return of war, 22 June 2022

The HSF is organized by FIIA, with support from the Ministry for Foreign Affairs of Finland, Ministry of Defence of Finland, and the Arctic Centre of the University of Lapland. The President of the Republic of Finland, Sauli Niinistö, acts as the patron of the conference.

The event will include both roundtable discussions among participants as well as panels livestreamed to a broader online audience. Online registration for all is available here.

9TH ANNUAL HELSINKI SUMMER SESSION
A new age of Nordic and Baltic Sea security?  The 9th Annual Helsinki Summer Sessions was held 6-7 June and brought together experts from the region, wider Europe and the United States to explore the future parameters of regional security from inside out and outside-in perspectives. The event consisted of four panels covering the US-Finland bilateral relationship, the “Northern” and “Southern” Baltic Sea regions, and the transatlantic relationship. CUSPP had the honor of welcoming Professor Mary Sarotte from Johns Hopkins University, Director Natalie Tocci from Istituto Affari Internazionali, Professor Baldur Thorhallsson from University of Iceland, Professor Dovile Jakniunaite from Vilnius University as well as several other experts from the region.

The Finnish Institute of International Affairs (FIIA) and the Finnish Security and Intelligence Service (SUPO) jointly organized the FIIA Forum 2022 seminar Changes and challenges in the Nordic security climate on Wednesday 27 April 2022. The recording of the event (in English) is available on FIIA’s YouTube channel.

Western financial warfare and Russia’s de-dollarization strategy: How sanctions on Russia might reshape the global financial system by Maria Shagina

In his new book Director of FIIA Mika Aaltola reviews the political significance of COVID-19 in the context of earlier pandemic encounters and scares to understand the ways in which it challenges the existing individual health, domestic order, international health governance actors, and, more fundamentally, the circulation-based modus operandi of the present world order.

The book is published by Routledge, more information here. 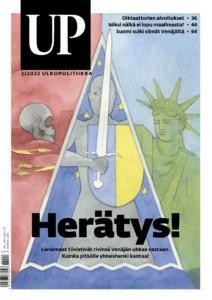 The new issue of the Finnish Journal of International Affairs (1/2022) examines the consequences of Russia’s brutal invasion of Ukraine. The EU has demonstrated unity and speed in its response to the war, Nato and the transatlantic alliance have been reinvigorated and developed industrial democracies have closed ranks by sanctioning Russia. What are the elements that make up the West’s unity and how solid is the underlying foundation? In the profile interview, Finnish Prime Minister Sanna Marin explains her thoughts on foreign policy: the big picture is a clash of values, in which Finland must be ready to defend its interests. Elsewhere, historian Riku Keski-Rauska expounds on the sea change in Finnish foreign policy: how a tradition of cautious coexistence with Russia left us blind to the regime’s violent expansionism.