New members at FIIA Board. FIIA will conduct a study on Finland’s support efforts in Afghanistan for the Foreign Affairs Committee of the Finnish Parliament.

Wishing You All a Joyous Holiday Season and a Happy New Year!

I would like to extend to the entire FIIA community and to our network partners my best wishes for 2022. The year 2021 was a productive one for FIIA. The number of staff has increased in two years from 48 to 71. Our audiences are bigger and more diverse than ever before. We managed to create a career model that includes the new positions of research director and research professor. We are currently hiring a research fellow in the EU programme and a senior research fellow / research professor in our developing China research area. 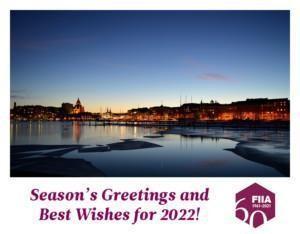 FIIA was successful in advancing its strategic goals – academic research, engaging in public discussion, and the supporting of policy making – with the help of its staff who dedicated themselves to producing high-quality relevant publications despite the continuing difficulties due to COVID-19. We wish you all a Joyous Holiday Season and a Happy New Year!

New members at FIIA Board

In the plenary session of the Parliament of Finland on 12 November 2021, the following MPs were appointed as members of FIIA’s Board for the term 1 January 2022 – 31 December 2026: Mr Ville Kaunisto (National Coalition Party), Mr Kimmo Kiljunen (Social Democratic Party of Finland) and Mr Sakari Puisto (Finns Party). FIIA wishes to thank Ms Sirkka-Liisa Anttila, Ms Lenita Toivakka and Mr Simon Elo for their valuable work as members of the FIIA Board. Their terms will end on 31 December 2021.

Sustainable democracy in the Nordic region

FIIA organized together with the Nordic Council of Ministers, the Government of Åland, the Åland Islands Peace Institute and the Ministry for Foreign Affairs of Finland a conference regarding cooperation between the Nordic states and Faroe Islands, Greenland and Åland as an example of sustainable democracy on 8 December, 2021. The conference marked the ending of the research project with the same name. The recording of the event is available on YouTube channel (Nordisk Samarbejde / Nordic co-operation).  See also the report “The Faroe Islands, Greenland and the Åland Islands in Nordic cooperation” by Katja Creutz and Sia Spiliopoulou Åkermark published as a background to the conference.

The FIIA Forum 2021, held on 29 September, celebrated the 60th anniversary of the Finnish Institute of International Affairs. This year the event was dedicated to Finnish foreign and security policy, and Nordic cooperation (in foreign and security policy). FIIA Forum 2021 was opened with a keynote by the President of the Republic of Finland, Sauli Niinistö. The recording of the event (in English) is available on FIIA’s YouTube channel.

The Foreign Affairs Committee of the Parliament of Finland has requested the Finnish Institute of International Affairs to conduct a study on Finland’s participation in crisis management, stabilization, reconstruction, development cooperation, and in humanitarian support functions in Afghanistan during 2001-2021.

Research Fellow Veera Laine defended her doctoral dissertation on nationalism in contemporary Russia at the University of Helsinki on 1 October 2021.

Dr. Christian Fjäder has joined FIIA as a Senior Research Fellow in October. He will work in FIIA’s EU-funded project International Business Risk and Resilience Monitor (IBRRM) and in a research project Europe Facing Great-Power Competition: Mapping Finland’s Risks and Options in the Geoeconomic Rivalry.

Dr. Anna Kronlund has started as Visiting Senior Fellow in the Centre of US Politics and Power (CUSSP) in November.

PhD candidate Eoin McNamara has started as Visiting Fellow in The Center on US Politics and Power (CUSPP) in November. He has expertise on Transatlantic relations, US grand strategy, NATO, transformation of war, and security in northern and eastern Europe.

Dr. Maria Shagina has started in November as Visiting Research Fellow at FIIA’s Center on US Politics and Power (CUSPP) in November. She will be working on currency statecraft and de-dollarization, focusing on Russia.

Dr. Timo Behr has started as FIIA Non-Resident Fellow. He will be associated with the project that maps out regional options for the Gulf region’s security and confidence building.

MSc Jana Titievskaia has started at FIIA in September as a Non-resident Fellow focusing on geoeconomics. She is a Policy Analyst for international trade at the European Parliamentary Research Service (EPRS), with over eight years of experience in EU institutions of trade and regulatory issues.

The geopolitics of the energy transition: Global issues and European policies driving the development of renewable energy by Marco Siddi 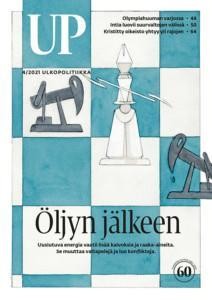 The latest issue of the Finnish Journal of Foreign Affairs examines the geopolitics of the coming green energy transition. As nations phase out fossil fuels and switch to renewable energy sources, new resources become the focus of geopolitical competition and power. The race is on to secure the minerals and metals needed for a sustainable energy system, from battery chemicals to rare earth magnets, with China taking an early lead. Other topics include the deep connections between Russian and American Christian conservatives, security in the Indo-Pacific region, and the future of interventions: Instead of learning from the United States’ failure in Afghanistan, France and the EU seem intent on repeating the same mistakes in the Sahel conflict. You can access the journal at www.ulkopolitiikka.fi (in Finnish). From now on you can find the magazine on Instagram too! Follow us on Instagram (@ ulkopolitiikka).