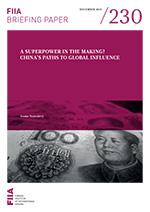 The People’s Republic of China, although planning to become one of the most influential states by mid-century, is not aiming for world leadership as is the case with the United States at present, but wishes to reform the global order by levelling the playing field to better reflect its own interests. Unlike the US strategy, China’s influence is not based on close alliances, and hence its policies and actions usually focus on using its economic might to gain influence in places that have not benefited from economic globalisation.

China’s two simultaneous and parallel policies for changing the global economic order aim to both reform the existing international institutions and build new structures of economic governance that are less influenced by the traditional great powers. In its wish to socialise China more into the international community, the West has allowed the country to continue its pick-and-choose approach to global governance, an approach that China is more than willing to continue.