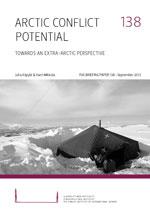 According to a popular notion, huge natural resource reserves located in the Arctic region will lead to a conflictual ”gold rush” when Arctic states compete to claim these reserves for themselves.

More precisely, there is the potential for interstate conflict in the Arctic area related to unresolved border issues, control of the Arctic maritime routes, and demarcation of the resource-rich continental shelves under the Arctic Ocean.

However, Arctic states have little to gain by letting the Arctic dynamics slip into a conflict state that would create an unfruitful investment environment in the region.

Should interstate conflict surface in the Arctic, the source is most likely to be related to complex global dynamics that may spill over to the region and which cannot be addressed with existing Arctic governance mechanisms. This extra-Arctic perspective should be increasingly taken into consideration by scholars and policy-makers.