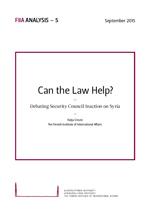 The inaction of the UN Security Council with respect to the Syrian crisis has generated widespread aversion. Decision-makers and international humanitarian organizations have debated the particular aspects in which the Council has failed to take measures, such as the widespread abuses that civilians are suffering in the war and the prevailing impunity of the violators.

International legal scholars have, however, debated whether the Security Council could be legally obliged to act in respect of a mass atrocity crisis. This represents a novel departure from the established idea that the Security Council has the right to act. Although this emerging position is controversial, it shows that the argumentation in connection to Security Council inaction is toughening up through increased resort to hard law.

Many, but not all, of the advocates for imposing a duty to act on the Security Council refer to the Responsibility to Protect norm. But the exact measures that fall under the scope of the duty to act remain unclear and context-bound: there can be no specific elaboration of what the Security Council must do. The most concrete discussion has related to the limitation of the veto use of the five permanent members. Yet, the international debate does not shy away from discussing the legal consequences of Security Council inaction for the organ itself, or its member states.

Until now, few scholars have sought to analyse if resort to law really can be beneficial to the overall goal of making the Security Council react to mass atrocity situations. This analysis therefore strives to discuss the elements of the debate and to answer the question ‘Can the law help?’ in remedying inaction. It will be posited that the law is no panacea when it comes to resolving when or by what means the Security Council should react when it comes to atrocity crimes. Its main value lies in building a decision-making environment in the Security Council which is open, explanatory and dialogue-based.