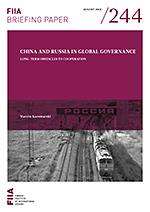 Russia and China play dissimilar roles in global governance and define their interests in this sphere in divergent ways. While the two states agree on certain international principles and norms, their engagement with global governance differs significantly. These differences pose the most serious long-term obstacle to closer cooperation between Moscow and Beijing.

China’s growing participation in global governance is tightly linked to the increasing scope of its interests. China supports economic globalization and market openness and is interested in political and economic stability on a global scale. Beijing also aspires to have a greater say in international institutions.

In comparison to China, Russia’s participation in global governance is significantly lower due to narrower interests on a global scale, fewer financial resources, and less advanced integration into the global economy. As a result, global political and economic stability is not crucially important for the current Russian leadership. On the contrary, uncertainty and volatility help Moscow broaden its influence.