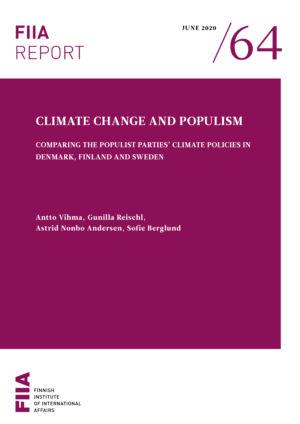 The rise of populism has disrupted established patterns of party competition in many Western societies. Related to this development, the current debates in the US and EU illustrate how empirical science on climate change may become intensively politicized, and all ambitious climate policies challenged, in the contemporary political landscape. This may take place notwithstanding the mounting evidence on the certainty of climate change and its disastrous consequences.

This FIIA report investigates populist resistance to ambitious climate change policy in the Nordic context, where countries have sought to assume global leadership on climate politics and have considerable public support for climate action.

In an analysis of the positions of authoritarian populist parties in Denmark, Finland and Sweden the report sheds light on how climate change is currently politicized. It also sets out an analytical framework of various political strategies for opposing ambitious climate policies: climate science denialism, climate policy nationalism and climate policy conservativism.