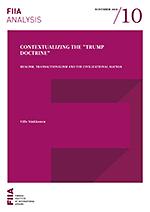 The “Trump doctrine” has been built in contradistinction to liberal internationalism, contains civilizational tropes drawn from neoconservatism, and is underpinned by a zero-sum materialist worldview borrowed from realism. Trump’s approach to the international is also transactional, which means he intermittently draws upon (neo)isolationist themes. This Trumpian amalgamation of four American foreign policy traditions can be termed transactionalist realism with civilizational undertones.

By embracing this approach to the international arena, Trump and his administration risk eschewing the importance of social relations that legitimize US international conduct, turning inter-cultural struggles into self-fulfilling prophecies, and undermining prudent long-term use of American power. If methodically carried out, the emerging “Trump doctrine” will prove detrimental for the future of US global leadership in a complex 21st-century world.

US "soft power" and the Trump administration: Disturbing signs