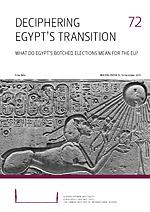 Egypt has entered a critical transition process. With President Mubarak’s health reportedly deteriorating, the stage is set for a transfer of power during next year’s presidential elections. The outcome of this transition will be crucial for the region.

Recent parliamentary elections have been a political farce, turning the country into a one-party state. While they show the regime’s determination to closely control the transition process, they have also demonstrated its inherent weakness and divisions.

With the main opposition candidates unable to run in next year’s presidential contest, the choice is likely to be between Mubarak’s son Gamal and another regime insider.

Irrespective of who succeeds Mubarak, Egypt’s next President will lack popular legitimacy and will have to assert his authority against domestic challengers. This will make Egypt an unpredictable and potentially volatile partner for the West.

In the short run, the EU will be forced to walk a tight-rope between encouraging more democracy in Egypt and preventing a slide to instability. When doing so, it ought to signal to the regime that any further democratic transgressions carry a price.

In the long run, the EU has to get used to the idea of dealing with a very different Egypt. This means that it needs to reconsider the role of Egypt in its Mediterranean and Middle East policies and adapt its bilateral relations to the new political realities.