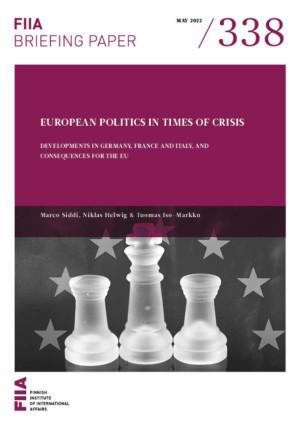 The war in Ukraine and the long-term consequences of the Covid-19 pandemic have put the spotlight on important political developments in the three largest EU members, Germany, France and Italy.

In Germany, the new coalition government led by Olaf Scholz is trying to adapt the country’s foreign, energy and fiscal policies to the new international scenario, relinquishing some of its long-term tenets.

France has just re-elected Emmanuel Macron as President, who is likely to advocate more flexibility in EU fiscal rules and strategic autonomy in foreign, defence and energy policy.

Mario Draghi’s government has attempted to steer Italy out of the economic and health crisis and has sought closer cooperation with France. Italy will hold a general election by June 2023, with four parties vying for pre-eminence.

In the wake of Brexit, Berlin, Paris and Rome have tried to revive the integration process. In the near future, it is expected that they will continue to drive EU politics, even if sometimes with different priorities, in close consultation with European partners.

France in the Eastern Mediterranean and the MENA region’s geopolitical competition: French grandeur or European sovereignty?