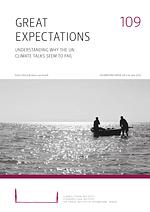 Every year, the UN climate negotiations seem to fail the test of saving the global climate in the public eye. The expectations placed on the UN climate regime are simply too high.
The great expectations of the UN climate regime — and the subsequent inability to meet them – are damaging, as they resonate with sceptics of international climate policy and UN multilateralism in general.
The world has changed since the early 1990s, when post-Cold War optimism provided fertile ground for establishing several environmental regimes. The new geopolitical and domestic realities provide the backdrop for the progress that can be achieved through multilateral climate negotiations.
However, the UN climate regime plays a crucial role by catalysing climate action, building a common vision between different states, enhancing transparency, and promoting the diffusion of novel policy ideas and instruments.
The role of the UNFCCC could be further strengthened by allowing it to act as an orchestrator which coordinates the array of initiatives.
Kategorier:
FN Klimatpolitik Multilateralism sv FIIA Briefing Paper