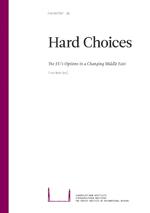 The transformation of the Arab world’s domestic order and that of its regional balance of power represent a major challenge to a changing and weakening European Union. There are some hard choices lying in wait, and a policy of ”muddling through” is no longer an option if Europe wants to maintain its long-standing ambition of becoming a global actor in its own right.

The Finnish Institute of International Affairs has published a FIIA Report about the EU’s future options as it approaches a changing Middle East. The report is based on a number of expert round-table meetings convened at FIIA throughout autumn 2010. The editor of the report, Timo Behr, works as a researcher in FIIA’s European Union research programme.

Hard choices: The EU's Options in a Changing Middle East