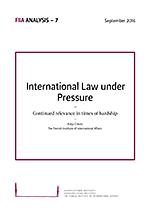 The present international political environment is marked by multiple crises, which all have a bearing upon how international law is perceived. Whether one refers to the conflict in Ukraine or to the refugee crisis confronting Europe, there is a widespread sentiment that such events embody a crisis of international law more broadly. This is not just because states have violated their international commitments or been unable to live up to them. A deeper discontent with the international legal system seems to be increasingly prevalent among Western states as well, making international law more of an inconvenience for states than a tool for cooperation.

The analysis will conclude with the finding that the main problems are to be found outside of international law itself; holders of political power should not treat international law as a nuisance, but should manifest their continued commitment to it by operating within the realm of the law and by making use of the tools provided by it in order to deal with contemporary concerns. If states choose to act outside of the law, it will not only undermine international law’s authority, it will also increase uncertainty in international relations.

A new Secretary-General for the United Nations: Fair selection more than window dressing