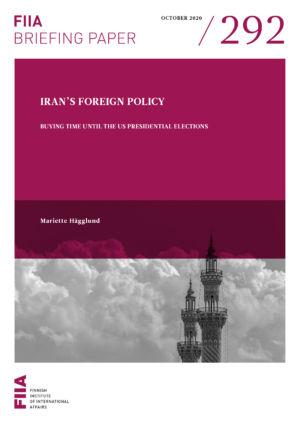 A key issue dominating Iran’s foreign policy agenda is the future of the Iran nuclear deal with regard to the next US president.

Non-state armed groups mark the core of Iran’s leverage in the region, but Iran is currently looking into diversifying its means of influence.

Although Iran considers its non-aligned position a strength, it is also a weakness. In an otherwise interconnected world, where other regional powers enjoy partnerships with other states and can rely on external security guarantors, Iran remains alone.

By being more integrated into regional cooperation and acknowledged as a regional player, Iran could better pursue its interests, but US attempts to isolate the country complicate any such efforts.

In the greater superpower competition between the US and China, Iran is unlikely to choose a side despite its current “look East” policy, but may take opportunistic decisions.

The Helsinki Process and its applicability: Towards regional security-building in the Persian Gulf