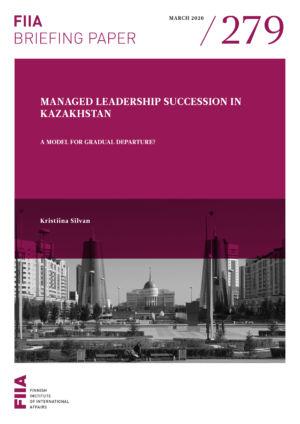 In March 2019, Kazakhstan’s authoritarian leader, Nursultan Nazarbayev, stepped down after three decades of rule and yielded power to his nominated successor, Kassym-Zhomart Tokayev. However, Nazarbayev has paradoxically remained the most powerful political actor in Kazakhstan. Kazakhstan’s model of gradual leadership succession could serve as an example to authoritarian states around the world, but it is particularly significant in the post-Soviet context.

Institutional and constitutional changes that took place in the 1990s were aimed at concentrating power in the presidency. However, modifications initiated by Nazarbayev in the 2000s and 2010s sought to weaken the Kazakh presidency while strengthening power vested in himself personally, in order to ensure the continuation of a political status quo and his family’s well-being after the transfer of power.

Despite the careful preparation and Tokayev’s relatively smooth ascension to power, it is still too early to evaluate the success of the transfer due to the vast powers retained by Nazarbayev. The transition of power in Kazakhstan remains an ongoing process and, as such, unpredictable.

What has remained of the USSR: Exploring the erosion of the post-Soviet space