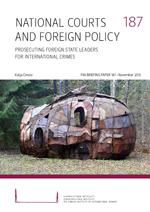 The prosecution of heads of state has received renewed international attention following the decision by French courts to launch an investigation into the possible crimes against humanity committed by the Syrian President, Bashar al-Assad.

The prosecution of foreign heads of state by national courts is a contested practice grounded in national laws and the allowance under international law to prosecute for a limited number of crimes. These crimes include, for example, genocide, torture, crimes against humanity, war crimes and piracy.

The decision by a national court to try a state leader is always a move with foreign policy implications. It is usually met with reproach by the home state of the accused leader and, as such, strains international relations.

In order to remove the influence of politics in the exercise of jurisdiction, developing states have called for a standardization of universal jurisdiction. Such efforts should, however, be treated with caution as it is impossible to make fully apolitical decisions on the criminal prosecution of foreign heads of state.