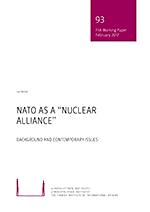 For more than two decades following the end of Cold War, NATO pursued steps to reduce the role of nuclear weapons in its deterrence and collective defense strategy. It also sought to allay stated Russian concerns in the mid-1990s about possible changes in its nuclear posture related to the accession of new members in East and Central Europe.

In recent years, however, various forms of ”nuclear saber rattling” by the Russian Federation—reflected in its nuclear modernization programs, shifts in its military doctrine, the conduct of recent military exercises, and threatening rhetoric by prominent Russian leaders–have prompted NATO to focus new attention on nuclear issues. This new attention is part of NATO’s broader effort, which relies mainly on non-nuclear capabilities and changes to NATO’s conventional force posture in northern Europe, to accomplish its deterrence and collective defense objectives.

For now, NATO’s response to Russian nuclear rhetoric and actions has been most evident in the toughened declaratory policy agreed at the Alliance’s July 2016 Warsaw Summit. However, the three ”nuclear Allies”—the United States, United Kingdom, and France—are determined to modernize their strategic nuclear arsenals over the coming decade. In addition, many of their non-nuclear Allies seem prepared to contribute to maintaining the NATO nuclear deterrent, which depends on U.S. non-strategic nuclear weapons based in Europe, for the foreseeable future.