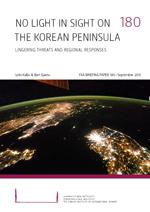 The situation on the Korean Peninsula remains highly unpredictable and continues to pose a major threat to regional stability and global security. The North Korean economy is not showing major signs of improvement, and the sustainability of the political system can be questioned.

In the short term, regime change is unlikely as the elite is satisfied, potential opposition has been crushed, and national reverence for the Kim dynasty continues. In the long term, however, a regime collapse might occur, either as a result of changing attitudes among younger generations, local uprisings that spiral out of control, or an internal power struggle after the death of Kim Jong-un.

North Korea is unlikely to abandon its nuclear-weapons programme, implying that little progress should be expected from the Six-Party Talks. Furthermore, the international community has generally conditionalized engagement with North Korea, demanding the regime to abandon its nuclear-weapons programme before considering increased aid or economic cooperation, resulting in the current stalemate.

Geo-political and geo-economic competition prevents other regional players from forming a united front with or without the US. New confidence-building measures, such as those launched by South Korea, only offer a glimmer of hope for rapprochement in the longer term.