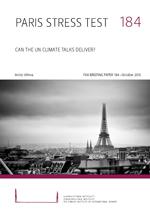 How the Paris agreement is perceived in the public eye has consequences for later events – in terms of good and bad publicity, political pressure, momentum, and hope. In more concrete terms, it will have impacts on countries’ political opportunities to strengthen their national contributions, as well as on the credibility of the UN climate regime as a whole.

By ratcheting up the expectations, for example by suggesting that the Paris meeting should immediately set up a global market for carbon, some industrial interest groups are looking for an outcome that ‘disappoints’ them after the meeting. In short, these constituencies want to see the Paris meeting ‘fail’.

Several progressive actors, in a seemingly similar vein, also set very high expectations for the multilateral UN process. These constituencies ramp up the expectations in the hope of maximizing the political pressure on governments and thus enabling meaningful compromises on the international level.

In the mainstream view, the most important functions of the Paris agreement include providing transparency and a predictable framework for countries’ emission reductions. Reaching agreement on these will require compromises on perennial, and highly political, issues: differentiation in the obligations between developed and developing countries, and how to mobilize support for developing countries.

It is tempting to think that in case the negotiations with the UNFCCC’s near universal membership fail, a small group of global powers could cut a deal. However, this will be the case only if the UNFCCC stumbles procedurally. If the interests of great powers are too diverse, and domestic support for climate action too weak, changing the room and number of players will do little to help.