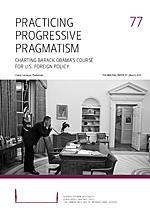 President Barack Obama’s view and handling of foreign policy challenges can be described as pragmatically progressive. His foreign policy blends a realist mindset and pragmatic approach with liberal and, at times, idealistic and far-reaching goals.

Obama’s foreign policy decision-making process is deliberate. This is not always compatible with the expectations of the modern political and media environment.

Two years into his presidency, Obama has engaged with the five major national security issues he outlined as a candidate, meeting initial success in four of them.

When faced with unexpected events largely beyond his control, Obama seems not to make snap decisions based on a particular ideology, preferring to take the time to see how events unfold.

When faced with crises that build up slowly or were previously identified in scenarios, Obama’s administration has responded robustly and deliberately.

After Rebalance: Visions for the future of US foreign policy and global role beyond 2016