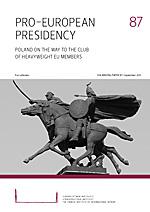 Poland took over its first Presidency of the Council of the European Union on 1 July 2011. The initial steps have now been taken, yet the most significant moves, as well as the outcomes of various meetings, forums, summits and negotiations are still to follow.

Coming into force due to the Lisbon Treaty of December 2009, the rules on which Council presidencies are founded have been substantially modified. As a consequence, the Polish presidency has also been affected in many ways by this change.

With a view to their agenda, the Poles attempt to engage in six particular areas during the six-month term of office: the EU internal market, economic challenges and future financial framework, Eastern Partnership and neighbourhood policies, defence cooperation, external energy policy and Europe’s intellectual capital.

The list of the Polish priorities seems extensive to say the least. By having introduced fewer and more specific goals, Poland could have best secured more intensive involvement in the most important issue areas.

To Poland’s credit, its reasonably pro-European Government, civil servants and political elite are most likely to have a positive impact on the eventual success of its Presidency; the only disadvantage being the national elections that will be held in October that many presume will interrupt the smooth running of the agenda.

Pioneers of a European Diplomatic System: EU Delegations in Moscow and Washington