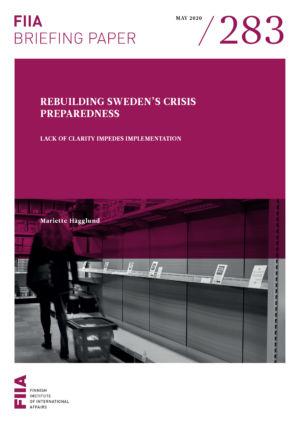 Changes in the security environment and Sweden’s related policy changes adopted in the early 2000s made large national-level planning and organization unnecessary. This led to a decentralization of Sweden’s crisis preparedness system. Covid-19 is the latest reminder of some of the shortcomings in Sweden’s crisis preparedness. Previous warning signs were the 2004 tsunami in Southeast Asia, and the forest fires in 2014 and 2018.

A major effort is currently underway in Sweden to build a streamlined system to respond to the broad scope of vulnerabilities and threats. A functioning crisis preparedness system is not only important in itself, but also as a contribution to Sweden’s total defence efforts. Rebuilding the system, however, will be slow and costly. Sweden’s crisis preparedness system is characterized by a complex authority landscape and discrepancies between sectors and regions.

While the Swedish constitution does not allow for exceptions in crises, and ministerial governance is forbidden, the Covid-19 situation may spark a discussion about the need for changes in the legal framework.

Hard security dynamics in the Baltic Sea region: From turbulence to tense stability