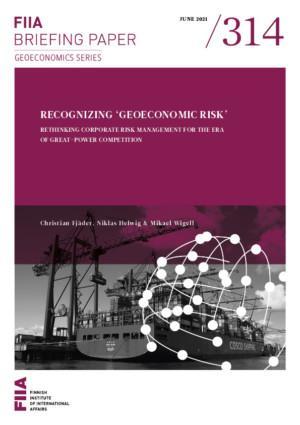 As economic policy has become a key strategic means in great-power rivalry, states are attempting to control the economic networks that connect the world. By instrumentalizing businesses they change the risk picture for both public and private companies.

The securitization of the economy entails a first source of new risk as states attempt to strengthen their control of companies in sectors considered strategic and security-sensitive.

Another source of risk stems from the balkanization of the global economy, whereby it would disintegrate into separate spheres of economies decoupled from each other. The competition for control of the global standard-setting regimes constitutes an emerging area of such risk.

A final source of risk is the weaponization that accelerates the use of sanctions and export controls. It entails more barriers for companies and puts pressure on the rules-based international system.

A novel concept of ‘geoeconomic risk’ is therefore needed to identify, assess and mitigate these new uncertainties associated with the repurposing of the global economy.

The emergence of strategic capitalism: Geoeconomics, corporate statecraft and the repurposing of the global economy