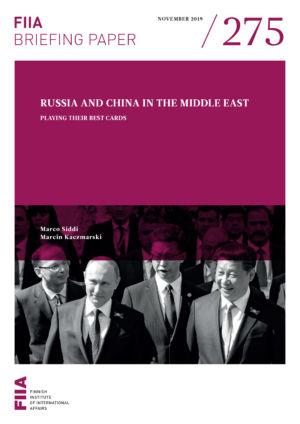 Russia and China share a number of interests in the Middle East: limiting US power and maintaining good relations with all players in the region while remaining aloof from the key conflicts, especially between Iran and Saudi Arabia, and Iran and Israel. Russia’s position has been based on political support for particular states, arms sales and the provision of civilian nuclear energy technology. Moscow has boosted its role by intervening militarily in the Syrian civil war. China has been strengthening its political position in the region for the last decade and its presence is more substantial from a financial-economic perspective.

The current Chinese and Russian regional posture further marginalises the influence of the EU in MENA. In the Middle East, the EU is already a weaker economic actor than China and a weaker military player than Russia. However, the EU can cooperate with Russia and China on upholding the Joint Comprehensive Plan of Action on Iran’s nuclear programme.

The Sino-Russian and US-Russian relationships: Current developments and future trends