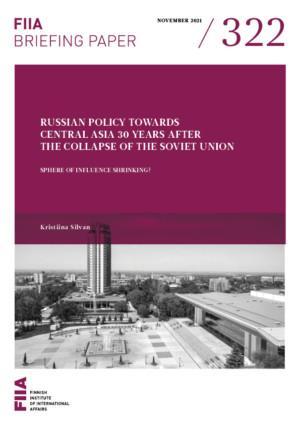 Russia views Central Asia as its sphere of influence and attempts to keep the five post-Soviet countries, Kazakhstan, Kyrgyzstan, Tajikistan, Turkmenistan, and Uzbekistan, in its geopolitical orbit.

Central Asian countries’ dependency on Russia is decreasing, albeit at a different pace in different policy spheres and geographical areas. This variation depends upon factors ranging from Moscow’s priorities, the presence and capability of Russia and other actors, and Central Asian domestic issues.

Russia’s policy in Central Asia is rooted in bilateral relations, but from the early 2000s onwards, Moscow has sought to integrate the region’s states into multilateral organizations that it leads, primarily in the spheres of economy and security.

Russian influence in the region is greatest in the security sphere and, due to the rise of China, smallest in the economic sector. People-to-people contacts remain strong as a result of the common Soviet past and current migration flows. Central Asian countries share Russia’s authoritarian outlook on politics.

Russia remains a powerful player in Central Asia, but Moscow’s lack of a forward-looking strategy and its current great-power posturing threaten its dominance in the future.

Three decades of Russian policy in the European part of the post-Soviet space: Swimming against the current