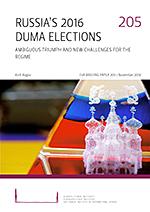 The recent 2016 Duma elections were planned by the Kremlin to attest to the fact that the period of troubled political development – which began during the previous 2011 Duma elections – is over. Further, the elections served to test Putin’s consolidated authoritarianism on the eve of the forthcoming presidential elections in 2018.

While successful in terms of preserving full control over the new Duma, the election results nevertheless demonstrated that the patriotic enthusiasm evoked by the annexation of Crimea has largely been exhausted. The pressure on the opposition, new electoral rules and reliance on regions with so-called ”administrative voting” secured a victory for the party of power, but in urban regions the turnout was very low and voting for the Kremlin’s party did not differ much from 2011 patterns.

Although the direct effect of the economic crisis on people’s political attitudes is still moderate, the continued long-term stagnation in the Russian economy that started even before the fall in energy prices remains the major challenge for regime stability.

Ambiguous election results force the Kremlin to seek new instruments of political consolidation. The Kremlin’s most probable strategy may be to combine toughening authoritarian institutions with maintaining high tension in the international arena in order to prolong the ‘rally around the flag’ effect domestically, by attempting or promising ”authoritarian modernization” to gain support in urban regions. As the presidential election date approaches, both Putin’s foreign and economic policies could become even riskier than they have been to date.

The persistence of Putin's Russia: Why don't Russians demand more?