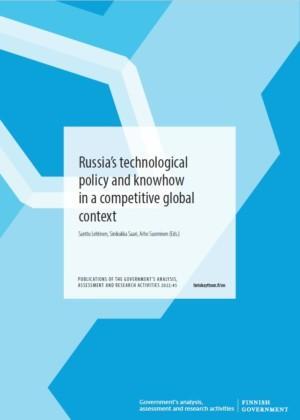 The global science and technology (S&T) landscape is increasingly embedded in the intensifying great power competition. Significant global attention has been paid to the dynamics between China and the United States while Russia’s notable S&T knowhow has been largely absent from the conversation. The ongoing war in Ukraine emphasizes the importance of S&T capabilities for Russia’s power projection ability and its great power aspirations. This report examines Russia’s current S&T knowhow and the trajectory of its technological edge. In addition, the report examines and evaluates the effectiveness of Russia’s science, technology and innovation policies and strategies. Furthermore, the report analyses Russia’s technological development in the context of its geopolitical implications, particularly with regards to the future of great power competition. The analysis of the future trajectories is based on Delphi -based foresight. Finally, the report highlights key implications for Europe and, in particular, Finland.

This publication is part of the implementation of the Government Plan for Analysis, Assessment and Research. (tietokayttoon.fi) The content is the responsibility of the producers of the information and does not necessarily represent the view of the Government. The permanent address of the publication is: http://urn.fi/URN:ISBN:978-952-383-228-2