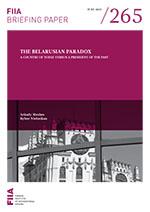 Belarus is undergoing important societal changes – public attitudes are evolving, the private sector is expanding, and the national culture is experiencing a certain revival – but the country’s old command and repressive model of governance shows no signs of change.

This widening disjuncture is a race against time. At some point in the future, the societal transformations will require a significant ideational and structural reform in the system of governance. The longer the reform is postponed, the more costly it will be for the country.

The end of Alexander Lukashenko’s personalist rule, whenever that happens, is likely to put a succession problem and, possibly, even a question about the country’s political independence on the agenda.

A principal aim of the Western policy towards Belarus should be pushing the country’s regime in the direction of market reforms, political liberalization, independent identity-building and all other means that strengthen the country’s resilience.