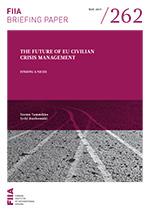 The EU’s Civilian CSDP Compact aims to revitalize an important tool that has been suffering from lack of interest among member states, amid the greater interest in boosting the EU’s defence capabilities instead.

Adding scalability and modularity to the Union’s civilian missions should make them more flexible.

Expanding the competences of internal security agencies to act externally may increase internal competition over the same resources and lead to overlapping tasks in external action.

Despite the momentum for reforming the EU’s key security instruments, there seems to be less interest in reforming the decision-making structures regarding them, which can lead to insufficient coordination and coherence between actors on the ground.

Proposed Frontex reform and its impact: Border politics and the external security nexus in the EU

The EU’s comprehensive approach to security in the MENA region: What Lessons for CSDP from Libya?