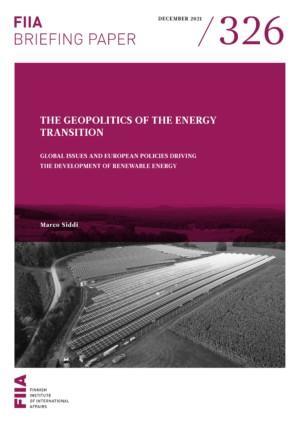 Fighting climate change makes a green energy transition imperative. The transition will have significant geopolitical consequences, notably a shift of power away from fossil fuel producers that do not adapt to a decarbonizing world.

Access to critical minerals, rare earth elements and storage technology for renewable energy applications will be essential, and will determine the new geopolitics of energy. Some critical elements such as cobalt are only found in a few areas of the globe.

Hydrogen is a carbon-free energy carrier that will allow the storage and dispatch of energy produced by intermittent renewable sources such as solar and wind. While hydrogen trade could lead to new dependencies, it will provide a back-up for the electricity system and strengthen energy security.

Currently, China is a leader in securing resources for the energy transition. The Belt and Road Initiative could consolidate its position.

As it strives to be a leader in the energy transition, the EU is focusing on securing relevant supply chains, deploying technology and developing hydrogen capacity.

International cooperation will accelerate the transition and give the world a chance to avoid catastrophic climate change.