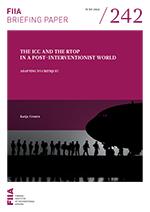 The International Criminal Court (ICC) and the Responsibility to Protect (RtoP) principle both seek to respond to mass atrocities. They are products of the heyday of the international liberal order, which allowed the formation of projects based upon interference in the internal affairs of states in order to protect populations from atrocity crimes. The changing international system with the redistribution of power between states has affected these projects by bringing uncontroversial activities to the fore in order to secure state acceptance.

Consensus on the RtoP extends to the primacy of the state in protection of its populations, while actions of the international community going beyond assistance and capacity-building are contested, particularly highly coercive ones such as military intervention.

Alongside its judicial task of trying perpetrators of international crimes, the ICC has focused on positive complementarity whereby national capabilities are enhanced. It has also engaged in symbolic activities, such as highlighting certain international crimes.

Trust in multilateral fora needs to be restored: The UN is needed more than ever