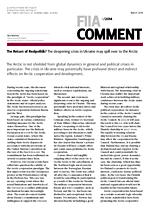 The Arctic is not shielded from global dynamics in general and political crises in particular. The crisis in Ukraine may potentially have profound direct and indirect impacts on Arctic cooperation and development. For example, the crisis may affect Arctic political cooperation in the context of the Arctic Council, which Finland will chair in 2017-2019. However, it may very well be that the economic logic will prevail over the worsening relationship between Russia and the West in the region. In any case, it must be understood that the Arctic is one political theatre among others where the contemporary great game among major powers is played out.