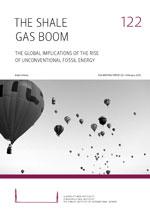 The shale gas boom, the recent and rapid commercialization of large-scale shale gas production, has made the US self-sufficient in natural gas and has considerable export potential. Gas is set to become the biggest fuel in the US energy mix and has helped the US to curb its greenhouse gas emissions. Cheap gas is also reinforcing the trend of rising industry investment in the US.

The impacts of the US shale gas boom are already being felt in Europe and Asia, for example via cheaper coal. The ‘coal renaissance’ in Europe can still be avoided either by a carbon price or other forms of regulation. Restoring the ability of the European Emissions Trading System to guide investments is the best solution, and can be done simply by setting an adequate emissions cap for the post-2020 period.

Globally, the rise of unconventional fossil energy sources means that the energy markets of the coming decades will move towards a more competitive and fragmented order, in which many energy importing countries also utilize significant domestic resources, and are able to balance their imports with regional exporters and the major global players.

These developments point to a weakening Russian grip on the European gas market, and problems for Russian export revenues in general. Other states lag far behind the US in shale gas technology, but will try to replicate the US experiment, while Russia will strive to prevent this from happening in its neighbourhood.