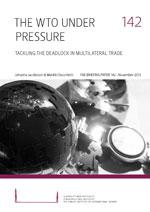 Multilateral trade liberalisation is in crisis. The WTO’s ambitiously named Doha Development Round has been ongoing for more than a decade. Only a few limited issues remain on the negotiation agenda.

While the round is being increasingly declared dead even by WTO members themselves, the same countries are concluding deeper trade agreements than ever before. Such progress, however, takes place at the bilateral and regional level.

Another major development is the appearance of deep regulatory issues on the trade agenda. The shift from customs tariffs to countries’ internal policies requires a certain like-mindedness from negotiation partners and poses challenges for national decision-making policies.

Developing countries have gained less from multilateral trade liberalisation than what they had hoped for. The shift towards more fragmented trade regimes makes them even more prone to remain bystanders in global trade.

At the WTO’s next ministerial conference in Bali, progress on agriculture, trade facilitation and the treatment of the poorest countries would give a much-needed signal that the WTO can still benefit all of its members.