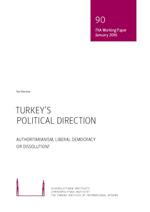 After the re-run of the parliamentary election on 1 November 2015, it is certain that Turkey will again be ruled by the Justice and Development Party’s (Adalet ve Kalkınma Partisi, AKP) one-party government. Based on this premise, this study provides a future-oriented analysis in the form of three scenarios: 1) an authoritarian Islamist state; 2) a consolidated liberal democracy; and 3) the dissolution of the Turkish state. The study also identifies three major drivers: a) the AKP and the Islamic-conservative state project; b) regional instability; and c) the Kurdish question.

Regarding scenario one, there are factors and processes present that decidedly increase the possibility of an authoritarian Islamist state in Turkey. On the other hand, the republican tradition of parliamentary democracy has at the same time proved to be remarkably resilient, suggesting that the course of events depicted in the positive scenario two still have a significant chance in the long run.

Scenario three, the dissolution of the Turkish state, would create enormous instability in the EU’s immediate neighbourhood and exponentially increase unpredictable tendencies and conflicts. The internal and external forces that could produce such a dramatic outcome are still rather weak, but they do exist in an embryonic form.

Thus, the republican modernization project attaching Turkey to the Western legacy of secular humanism should not be underestimated and may well prevail in the end. For the time being, however, it seems to be on the losing side as the political process is consolidating the Islamic-conservative version of Turkish nationalism. At the present moment this current is pointing to a concentration of power and a non-pluralist authoritarian regime whereby national identity is increasingly constructed in a form that conceptualizes political liberalism as an existential threat.

Turkey’s Islamic-Conservative State Project at a Crossroads: President Erdoğan did not get his “super presidency”, but Turkey will probably soon head to new elections