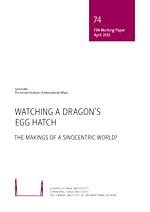 As China’s hard power is growing, the Party-state is keen to construct a new narrative which legitimizes China’s position as a world leader also from the soft power perspective. It has even been suggested that a Chinese international relations theory or model will inevitably emerge as a consequence of China’s growing role on the world stage on the one hand and the rise of traditional values in China on the other.

Apparently, academics across the country have been enlisted to work on the project to create a Chinese international relations model. They rely very much on the main polito-ethical tradition in China, Confucianism. The Confucian version of the Golden Rule, “what you do not wish for yourself, do not do unto others”, is said to lead to the principles of mutual non-interference, equality and peaceful coexistence.

A Chinese international relations model seems to suggest a rules-based community or commonwealth, global in scope and international or even supranational in character. The authority to define the rules would lie within the state, which manifests responsible and moral leadership.

Thus far, the project to create a Chinese international relations model seems to be just another effort to disguise China’s real identity with the mask of benevolent Confucius. It remains to be seen to what extent the “model” will actually guide China’s foreign policy decision-making.