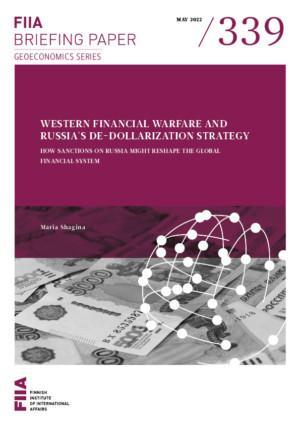 Since 2014, Russia’s de-dollarization plan has been guided by security and geopolitical considerations. By dumping the US dollar from its foreign currency reserves, Russia diverted from the traditional approach where liquidity and the credibility of the issuer determine the choice of currency.

In 2022, Russia has doubled down on its efforts to de-dollarize the economy. What started as de-dollarization in 2014, transformed into full-blown rouble-ization in 2022.

Following the dynamic of an emerging multipolar world order, the global financial system is also gravitating towards fragmentation and currency multipolarity. The overuse of sanctions could strengthen revisionist countries’ desire to increasingly conduct their trade in non-dollar currencies in an attempt to avoid US oversight.

If current trends continue, the de-dollarization effort could gain ground and undermine the primacy of the US dollar.

Central Bank Digital Currencies and the implications for the global financial infrastructure: The transformational potential of Russia’s digital rouble and China’s digital renminbi