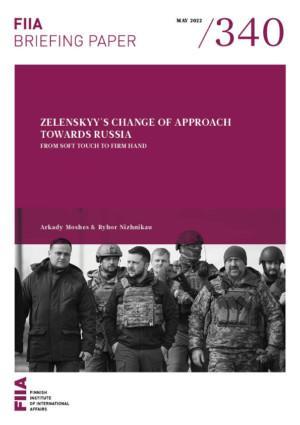 Since his election as the President of Ukraine in 2019, Volodymyr Zelenskyy’s Russia policy has been driven by his campaign promise to bring peace to Ukraine. Reaching an agreement with President Vladimir Putin personally was the quintessence of Zelenskyy’s approach to Russia.

Zelenskyy’s personal and business past, his lack of political experience, as well as complications in Ukraine-West relations help to explain his Russia policy.

Zelenskyy’s approach to Russia was externally unrealistic since Russia wanted him to capitulate rather than negotiate a compromise. It was also domestically divisive since peace at the cost of Ukraine’s concessions on matters of principle was unacceptable to many Ukrainians.

The focus on reaching an “understanding” with Moscow gradually weakened Zelenskyy’s political position in Ukraine. In response, he had to toughen his public stance regarding Russia and pro-Russian actors, but the old course was not abandoned completely.

The Russian invasion has profoundly transformed Ukrainian society and politics. The President’s policy has become part and parcel of the new national wartime consensus on Russia.

Western support for Ukraine: How to contribute to achieving peace