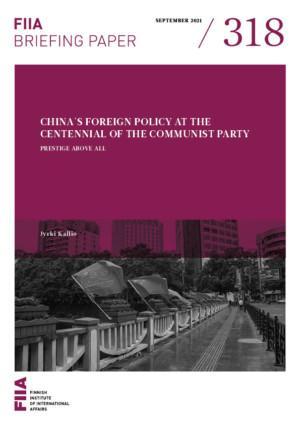 Chinese external and internal politics have manifested increased ideologization in recent years, presumably laying the groundwork for the Communist Party’s 100th anniversary this year. The trend is likely to continue at least until the completion of the 20th Party Congress in 2022.

In China’s foreign policy, this ideologization has taken the form of increased emphasis on the realization of China’s “Grand Rejuvenation” and heightened sensitivity to anything that might stand in its way. This is in line with the Party’s historical narrative emphasizing the “century of humiliation” and the ensuing efforts to curb China’s rise.

The resulting prestige-driven foreign policy has proved harmful to China’s external image. An easing of Chinese politics may thus be conceivable once the Party has left the current sensitive times behind to its satisfaction.

Countries with vital economic ties to China, and which depend at the same time on continued US support in security policies, have little choice but to continue tightroping for a few more years at least.