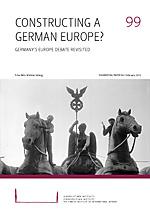 EUROPE SHOULD NOT FEAR GERMAN STRENGTH, BUT GERMAN WEAKNESS

Germany’s ambiguous role during the eurozone crisis has stoked fears that a more self-confident and dynamic Germany is threatening the political independence and economic well-being of its neighbours and will lead to a “German Europe”.

German weakness, not power, is the main challenge to EU integration. In order to build a supranational EU and a “European Germany”, Germans will have to overhaul their Cold War institutions and traditions that have become a brake on EU integration.

Germany’s political elite continues to favour a federalist vision for the EU, but faces a somewhat more sceptical public as well as strong domestic veto players, such as the Federal Constitutional Court, which limit their pro-integrationist tendency.

While Germany continues to support the use of the “Community method”, Angela Merkel has increasingly resorted to the “Union method” that places function over form and prioritizes pragmatic problem-solving to address the current crisis.

Germany’s uncompromising attitude towards the eurozone crisis and its sometimes erratic foreign policy are the product of its deeply embedded stability culture and instinctive pacifism, rather than a sign of growing global ambitions.

European partners will have to help Germany in its indispensable leadership role by jointly formulating a vision for the European integration project and by assisting Germany in adapting its political institutions and culture.