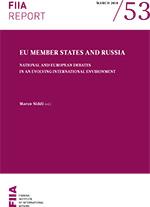 In March 2014, when Russia annexed Crimea, relations between Moscow and the European Union precipitated into their deepest crisis since the end of the Cold War. Throughout 2014 and early 2015, the Ukraine crisis made headlines and emerged as the most urgent security challenge for the EU and its member states.

Between 2015 and 2017, however, the international scenario became even more complex, with significant repercussions for Europe-Russia relations. The refugee crisis, escalating civil wars in Syria and Libya, terrorist attacks, Brexit and the weakening of the transatlantic alliance following Donald Trump’s election posed new formidable challenges for the EU. Russia sought a role in many of these crises, for instance by proposing an anti-terrorism coalition with the West in the Middle East or by reportedly intervening in some Western election campaigns.

This report zooms in on the debates on Russia in several EU member states that play a key role in the Union’s relations with Moscow. It reveals how national perspectives evolved and sometimes diverged due to different assessments of the crises and of Russia’s role in them.

The Southern Gas Corridor: Challenges to a geopolitical approach in the EU’s external energy policy