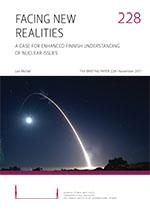 After a decades-long hiatus, nuclear weapon issues have returned to the forefront of international security concerns. In recent months, North Korea has made significant progress in its nuclear weapon and ballistic missile programmes; President Donald Trump threatened to end US participation in the agreement limiting Iran’s nuclear activities; and over 40 countries signed the world’s first legally-binding treaty to prohibit nuclear weapons.

Meanwhile, Russian military developments and perceived “sabre rattling” are prompting NATO to focus more attention on nuclear issues. The US, UK and French nuclear modernization programmes are not simply a response to Russia, but Moscow will likely portray them as such.

Finland’s security and prosperity increasingly depend upon a stable and secure international environment. New strategic realities could affect that environment in profound ways. Today, the threat of a military confrontation in the Nordic region is low in comparison with parts of Asia and the broader Middle East, but it cannot be seen as non-existent.

Finland will remain a non-nuclear weapon state. Its expertise in nuclear affairs traditionally focused on non-proliferation (via international agreements and EU activities) and arms control, but this has eroded during the past decade or so. Given the new realities, Finland should reverse that trend and enhance its understanding of the role of nuclear weapons in regional and global deterrence.